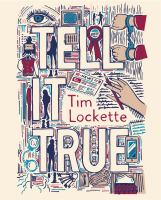 Tell It True
by Lockette, Tim
Rate this title:
vote data
Click an element below to view details:


An unlikely high school newspaper editor fights to cover a local murder case and learns what is most important in friendship, in journalism, and in life. Lisa Rives had higher expectations for sophomore year. Her beauty queen mom wonders why she can't be more like other 15-year-old girls in their small Alabama town. Lisa's Dad, well, she suspects he's having an affair with a colleague at his top-secret job. Her friend Preethy seems to be drifting away, and Lisa spends her schooldays dodging creepy boys and waiting to graduate. Then she finds herself in charge of her high school newspaper, which is the last thing she wanted--school newspapers are for popular kids and club-joiners, not outcasts like her, and besides, the stories are never about anything you actually want to know. But after accidentally tipping the scales in the school election, then deciding to cover a "real" story--the upcoming execution of a local man charged with murder--and becoming a surprise news story herself, Lisa learns some hard lessons about friendship and truth-telling. As Lisa navigates the dilemmas, challenges, and unintended consequences of journalism, she finds her life--and her convictions--changing in ways she couldn't have imagined. Tell It True is a sometimes hilarious, sometimes devastating, always relatable coming-of-age story about the importance of speaking the truth in a world of denial and fake news.
► Shelf Browser
► MARC Record