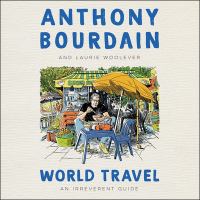 View other formats and editions

View all formats and editions (3)

Anthony Bourdain was born in New York City on June 25, 1956. He graduated from the Culinary Institute of America in 1978. He wrote numerous nonfiction books including Kitchen Confidential: Adventures in the Culinary Underbelly, The Nasty Bits, A Cook's Tour, No Reservations: Around the World on an Empty Stomach, Medium Raw, and Appetites: A Cookbook. He also wrote several works of fiction including the graphic novel Get Jiro! and the comic Anthony Bourdain's Hungry Ghosts. He was the host of several television shows including A Cook's Tour, Anthony Bourdain: No Reservations, The Layover, and Parts Unknown. He committed suicide on June 8, 2018 at the age of 61. (Bowker Author Biography)